Charles Jencks: The Architect in the Jumping Universe

To celebrate the launch of the new Jencks Foundation website, Drawing Matter invited Jencks Foundation director, Lily Jencks to contribute to their fast-growing repository of new and historical writing on architecture and drawing. The essay contextualises two drawings by Charles Jencks for the Garden of Cosmic Speculation from the Drawing Matter collection, and explores how Charles’ early interest in meaning and semiotics was further developed through his later landscape designs.

Gardens have always been the location to contemplate and speculate on man’s place in nature. Gardens bring the macrocosm into the microcosm by the necessity of being a living place, connecting to the wider rhythms, ecological networks, or the even more abstract forces that create our world. When Charles and Maggie Jencks (my parents) started to create what would become the ‘Garden of Cosmic Speculation’, they had already developed design languages and conceptual obsessions in their ‘home as Post-Modernist manifesto’, originally called The Thematic House. What propelled Charles from his passionate championing of a contemporary architecture movement in the late 1970s – earning him the title of the ‘Pope of Post-Modernism’ – out into the Galaxy and back to design this iconic garden? And what can his drawings tell us about his ambition and process?

In Charles’s first book, Meaning in Architecture, he developed a thesis about how architecture can be a vessel for meaning and the polyphony of languages it uses to communicate.1 He would develop this line of thinking in The Language of Post-Modern Architecture, which charted the rise (and questioned the fall) of the Post-Modern movement through six evolving editions.2 The book focused on the style’s use of elements that modernism had stripped bare: ornament, historic reference, craft, colour, irony, joy, and jokes, all in the service of communicating meaning.

In this book Charles would write, ‘ultimately, it is the way a language is used that matters, the actual messages sent as much as the particular language used’. 3 If you are interested in reading layers of meaning in architecture, at some point you have to ask, what should these meanings convey? This is the question Charles and Maggie began to answer as they began work on their own house in 1978. In The Thematic House, they developed a playful and excessive symbolic language at all scales: from spatial layout to ornamental detail.

The couple worked with a group of collaborators that included architects Terry Farrell and Piers Gough, artists such as Celia Scott and Ilinca Cantacuzino, and scientists and engineers. There are many overlapping architectural references in the house, with blocky forms from Indian architecture in the Indian-Summer kitchen to Egyptian ornamentation and elemental forms in the office. The house is saturated with what Charles described as ‘everyday symbols such as the Sun, Earth and Moon, and the four seasons… so that the house itself becomes a giant symbol’. Like the 4000 years of Egyptian design he enjoyed, or the Hindu Janta Manta, this architecture is a model of man’s place in the Cosmos.

The Solar Stair in the centre of the house, around which the rest of the house orbits, was a detailed project on how symbolic meaning can permeate a form at several scales. The stair, in Charles’s words, has ‘more or less 53 steps’ (48 on my count, but you can find five extra on adjacent landings), each divided with seven cuts to represent each day of the year.4 January is at the bottom and December at the top, with four steps to a month and each month represented by a new version of the zodiac in a mirror cap detail. The banister holds chromed orbs representing the Sun, Earth, and Moon. It was the start of what would become a fruitful turn toward collaborating with scientists throughout the rest of his career. Charles consulted Doctor McNally, an astronomer at the Royal Observatory, on possible meanings in the rhythms of the stair landings (which obviously had to follow the different levels of the house) and the two came up with layers of astronomical meaning that suited Charles’s requirements. A fortuitous layer was the half-landing where the architectural library is situated, occurring about halfway through the year on Charles’s equinox birthday on the 21st of June.

Charles wrote a witty text reviewing this project where he took on two voices: the architect of the building and the critic writing a review. In it, he admits he is a ‘critic who architects, not an architect who critiques’. For Charles, it was always the ideas that superseded the built form. On ideas preceding or succeeding (post-rationalisation was really of little interest to him), he knew, as a designer and critic, that meaning was developed in both the design and the review. The cultural discourse and the community were as important to him as the built work.

We have now opened this house to the public as The Cosmic House (rechristened just before Charles’s death in 2019), and hope to maintain it as a place where conversations about the public role of architecture and its ways of communicating meaning continue to flourish.

Charles’s move into landscape design was instigated by a functional problem; some boggy land at Maggie’s parents' house in southwest Scotland needed to be excavated. But what to do with all of the spoil cut from the ground? Charles and Maggie decided to pile up the excavated earth into their first landforms; large steep-sided ‘mounds’ with linear paths that articulate undulating waves. The results in plan are somewhat psychedelic, but also point to the interconnected nature of ecological networks, self-organising geometries, or the layers of materials and movement which weave through the landscape.

In any symbolic system, Charles knew that meaning is always contingent, and he loved an ‘enigmatic signifier’; the way that forms that could hold several different meanings or mixed metaphors that communicate to people differently depending on their cultural background, interests, or simply their state of mind. The snail mound is also a double helix. Like the spiral solar stair in The Cosmic House, the twisting form is also the DNA mound. Analytic Synthetic shows a view from on top of the DNA/snail mound, towards the snake mound: its S curve is also a ‘soliton wave’, one of the fundamental forms of energy movement in the universe, explained by physicists as a ‘self-reinforcing wave packet that maintains its shape while it propagates at a constant velocity’. Maggie had been lecturing on her book The Chinese Garden, the first modern book in English on the intensely designed scholar’s gardens in China.5 The waves in the garden and landscape were, for her, a representation of Chi or ‘universal energy’. Meaning is conveyed by the lines, geometries, and symbols in the design, but shades of interpretation are created by the viewer.

In this drawing, the serpentine landforms (a kind of English picturesque on steroids) are juxtaposed with straight lines, that highlight wider connections in the landscape, and sightlines towards the magnetic north – or the forceful pull of a strange attractor. The divergent lines appearing in the sky from above the blackened evergreen tree-band that frames the foreground could be lines of force from the magnetic north, or they could be the chemtrails of the fighter-jets that swoop faster than the speed of sound down the river valley, enjoying aerial the view of this strange garden. This drawing is not one in which Charles and Maggie worked out ideas; it was completed after construction. It was drawing as a way to read and understand the landscape. It analyses and points to meanings that might not be so obvious in the flesh, to create a synthetic view and communicate it.

After his first collaboration with an astronomer at The Cosmic House, Charles worked with many other scientists to help develop the forms, structures, and details of the landart and landscape projects that were to follow. I worked with him on several projects. In one, we developed representations of ecological relationships with local ecologists (The Ecoline Suncheon in South Korea). His largest project was the Crawick Multiverse in Sanquhar in Scotland, where he also coordinated a few annual festivals bringing together theoretical physicists and theatrical performers in their wellingtons to walk a simulacrum of Superclusters of Galaxies, Andromeda spiral mounds, etc., and debate contemporary scientific theories. For this project, he consulted eminent astronomers such as Lord Martin Rees, Paul Davies, Lee Smolin, among others, to investigate an idea that tests the very limits of human perception and which not all physicists even agree is true.

Charles’s later work continued to mine contemporary scientific theories as content for his language of landforms and sculpture. He was interested in revealing the fundamental laws of the Universe at different scales, from the Multiverse to the microscopic, with inhabitable sculptures of DNA (Lord Rees also commissioned Charles to do a DNA sculpture at his college in Cambridge), and through all the sciences. I remember him saying to me, with his softened American twang and typical urgency, ‘Lily, it is always about the content, always’. For him, the driver of how we should design our built environment was philosophical; exploring the questions Gauguin posed in his masterpiece (and which Charles often used to illustrate his lectures), ‘Where do we come from? What are we? Where are we going’. Charles found many means and different media to investigate these questions, using design as a patient search for meaning as a universal project. 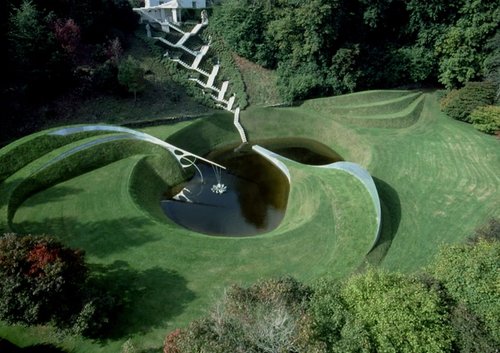