‘The Flower Garland and the other various sutras are like stars in this dark night, while the Lotus Sutra is like the moon. For those who have faith in the Lotus Sutra, but whose faith is not deep, it is as though a half moon were lighting the darkness. But for those who have profound faith, it is as though a full moon were illuminating the night.’

The Writings of Nichiren Daishonin, The Essence of the "Medicine King" Chapter, Recipient unknown, 1265.

In 1982 Charles Jencks asked me to design some glass for his new Post-Modern house in Lansdowne Walk. It was the etched glass for the Moonwell, the discs showing the astrological signs to mark the 52 steps of the solar staircase, and the four circles of coloured glass covering the lights depicting the four seasons in the Dome of Water jacuzzi. The project demanded countless meetings throughout the year, vibrant discussion, drawing and re-drawing until Charles was satisfied. He used this process to work it out. He needed to see the design to know what he did not want! Thus, through a process of elimination we found our way.

For the Moonwell, I had to design a moon with the craters visible and to include a toad. We discussed different legends and interestingly most of them presented a plurality of meanings. After 40 years it is hard to recall whether there was one that was the preferred. For the Chinese, the three-legged toad, Jin Chan, symbolised wealth. The markings on its back resembled coins, hence the idea of golden coins emerging from its mouth. This toad would appear during the full moon, presaging good news. In a home the toad should be put high up and in a well-lit place, to attract prosperity. In some stories the toad was once the princess Chang O, whose husband the immortal archer shot her, hence the loss of her fourth leg. In another version she was stealing immortality, the elixir of the gods, in yet another she was protecting it from being stolen. In either case, she gained immortality fleeing to the moon and turning into a toad.

Seeing the Moon at the top of the Moonwell 40 years later, I noticed also a pair of eyes, but now I have no memory why we put them there. Would these be the eyes of the mythical King Yao, or those of the Princess, or perhaps the Man in the Moon in the culture of the West? I imagine the narrative could continually shift depending on who is looking and even on the time of day. Maybe Charles and Maggie suggested the stories to intrigue their children at bedtime. With their bedrooms opening on to the Moonwell, there must have been evenings where the glass image echoed the real, both appearing to hang in the sky, one made of glass and the other only to be seen through glass.

In these 40 years I never saw the finished house—until now. After my job here was completed, I went travelling to Australia, and later moved away from glass design to making my own work as an artist. The following year in 1983 I became a Buddhist and now I can see how working on The Cosmic House was one of the steps that led me there. The shifting realities we are surrounded by in life clearly co-exist, funnelled through our individual subjective experience, but also underpinned by an eternal structure of the energy of life.

Charles introduced me to Eduardo at the Royal Academy of Art café. On seeing an image of my bust of Leéon Krier, he immediately agreed to sit for me.

Hephaestus in The Cosmic House: Program and Process 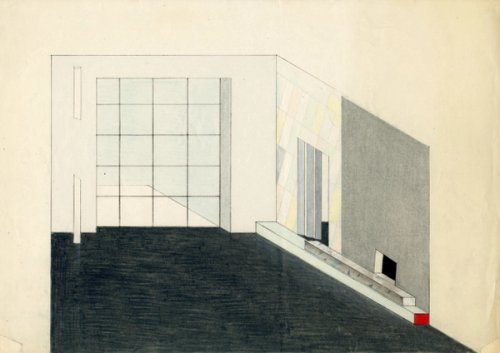 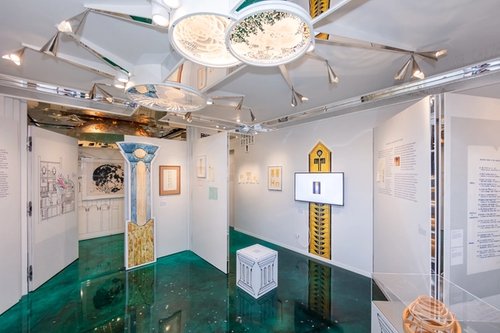