The spiral staircase, at the physical and conceptual centre of The Cosmic House, is at once a reference to the double helix of the DNA, the spiral movement of galaxies and of time, as well as to the Sun and the solar system. Designed by Terry Farrell, it is a central element that cuts through the house and in many ways informs both the architectural structure and the symbolic programme for other areas of the house. The circular plan of the ground floor revolves around the Solar Stair, and is based on five seasons of the year, including Indian Summer. In the process of design David Quigley, one of the project architects realised that there were 52 steps, one for each week in the year. The stair begins with January at the bottom and ends with December at the top. The Architectural Library is situated at the point of the Summer Solstice – June 21st, which was also Jencks’ birthday. Thus the cosmic rhythms that inform the design of the Solar Stair also reverberate throughout the spatial and decorative programmes of the rest of the house. 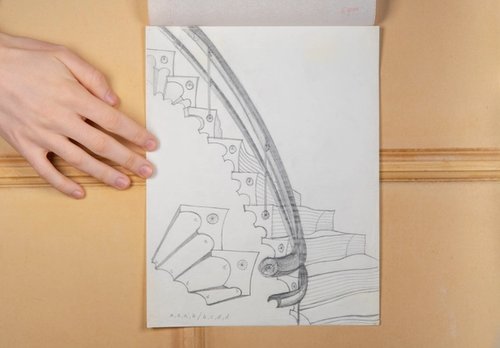 Solar Stair at The Cosmic House